Cock Fighting in the Philippines: More than just Entertainment 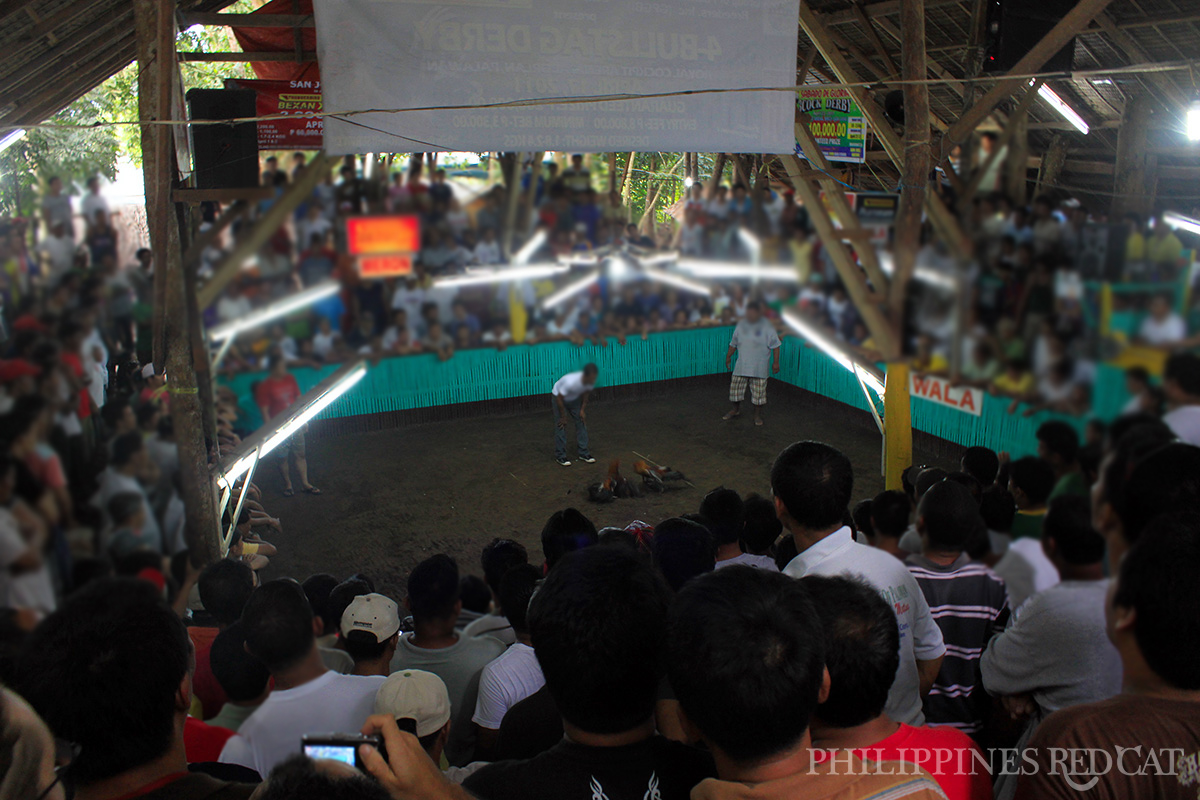 One of the things you should definitely not miss out while visiting the Philippines is to attend a cock fighting event (unless you are a vegetarian or member of GreenPeace). They are usually held every Sunday from as early as 9am and last until the late afternoon. It’s one of the most cultural enriching experiences in this country and you’ll get a feel for the temperament, character and way of life of Filipinos.

What is it all about?

Cock fighting is a battle for life and death between two cocks (roosters) which have been risen and given the best possible care by their owners until they are about two years old. That’s when they have reached their strongest physical state.

Cocks have a natural aggression towards all males of their species. So what the owners do on the day of the fight is they would bring their cocks to the fighting arena and have sharp spurs tied to their legs. When the time has come, they bring them into the ring in pairs to let them fight until one of the cocks dies or is too weak (means bleeding) to stand up again.

A few fun facts about cockfighting in the Philippines:

To the Filipinos, cock fighting is more than just entertainment. The arenas are packed every Sunday in towns all over the country with 99% being Filipino men (you barely see any Filipina women in these places). There is barely anyone who comes to the arena and does not gamble for money. From an outsider point of view, it’s seemingly impossible to make a prediction which cock looks stronger and more likely to win. But these guys seem to have a sharp eye and, usually well above 30 years old, seen thousands of fights in their lives. 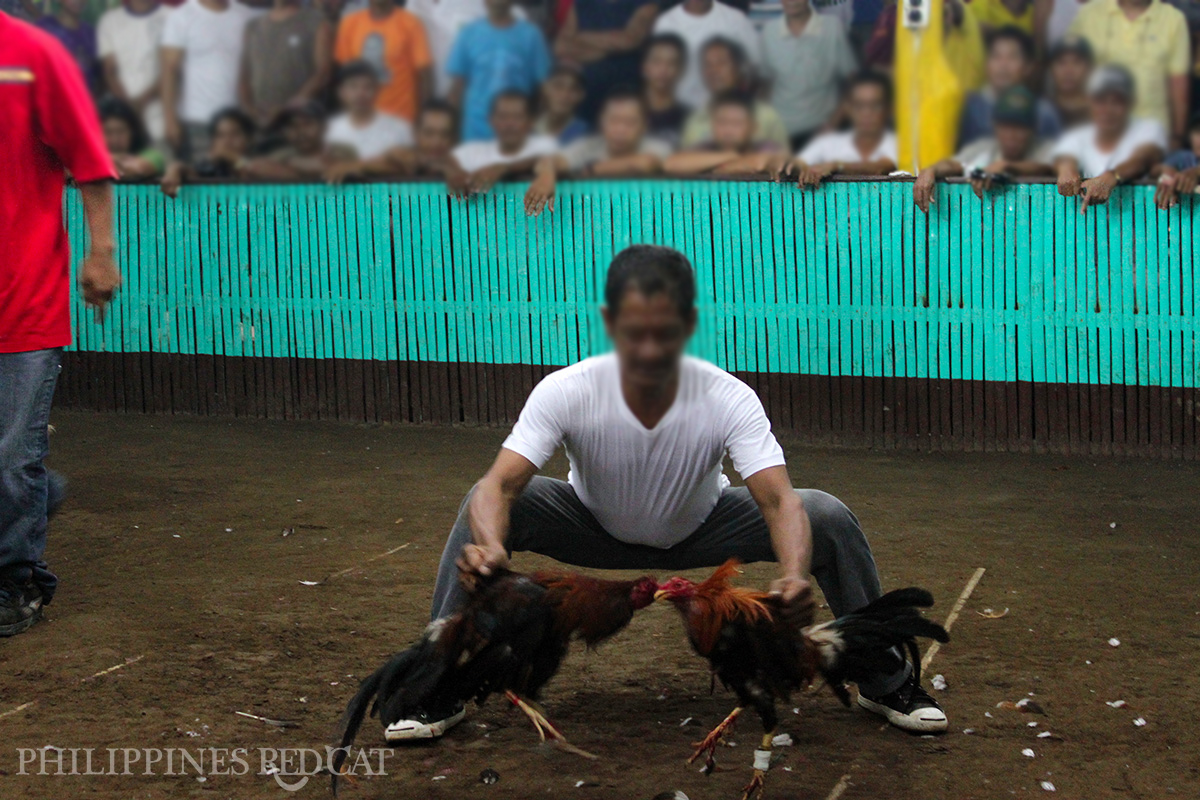 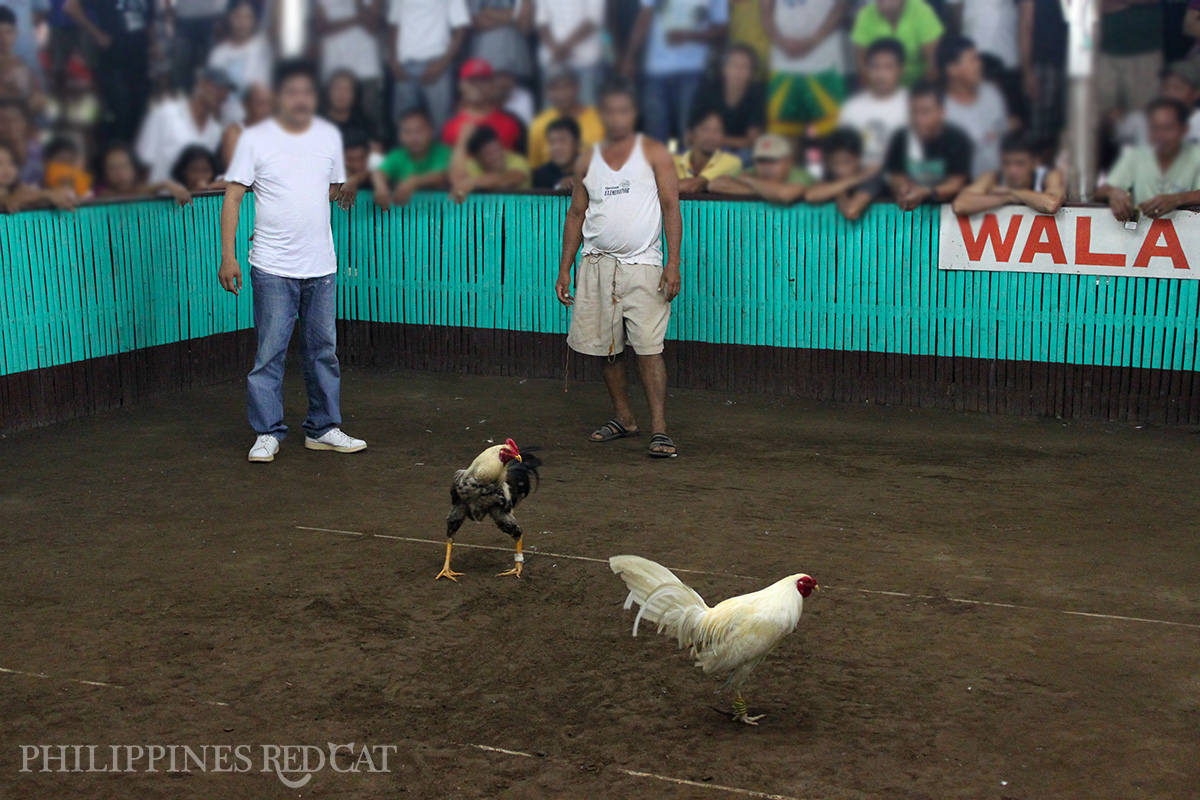 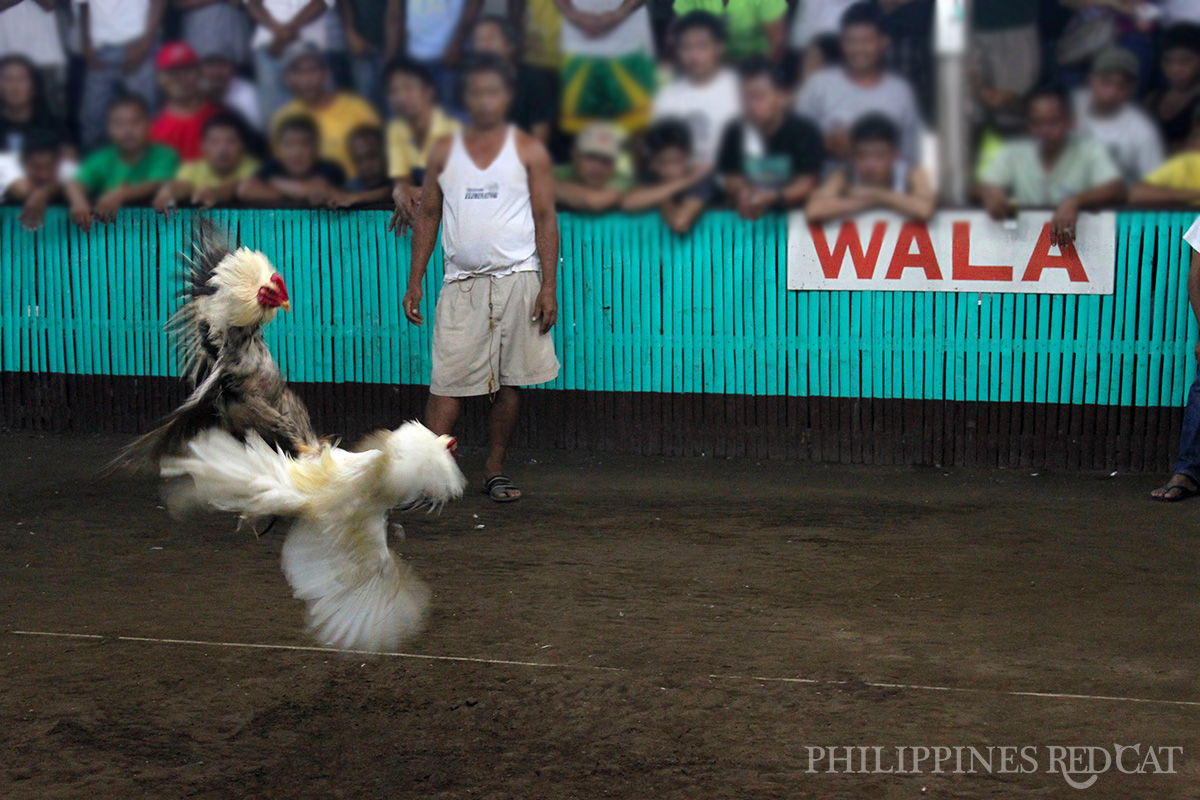 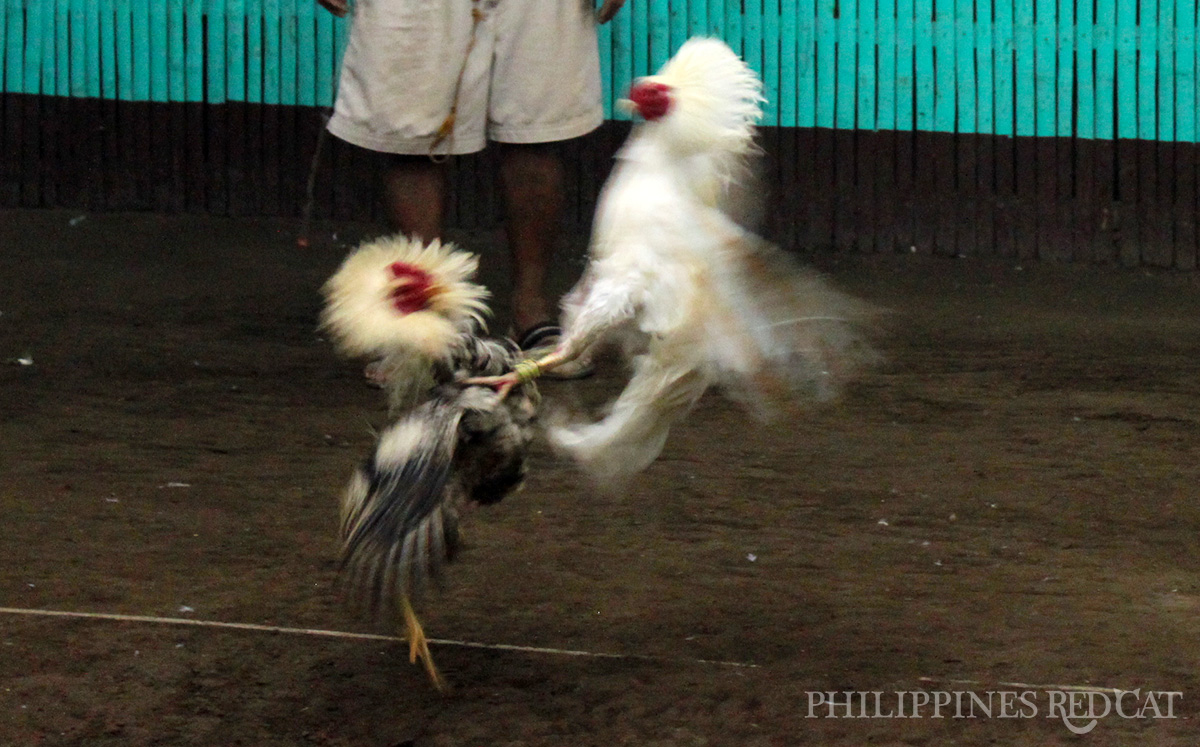 Sometimes one of the cocks is even given 2 blades when it is considered weaker than its opponent. 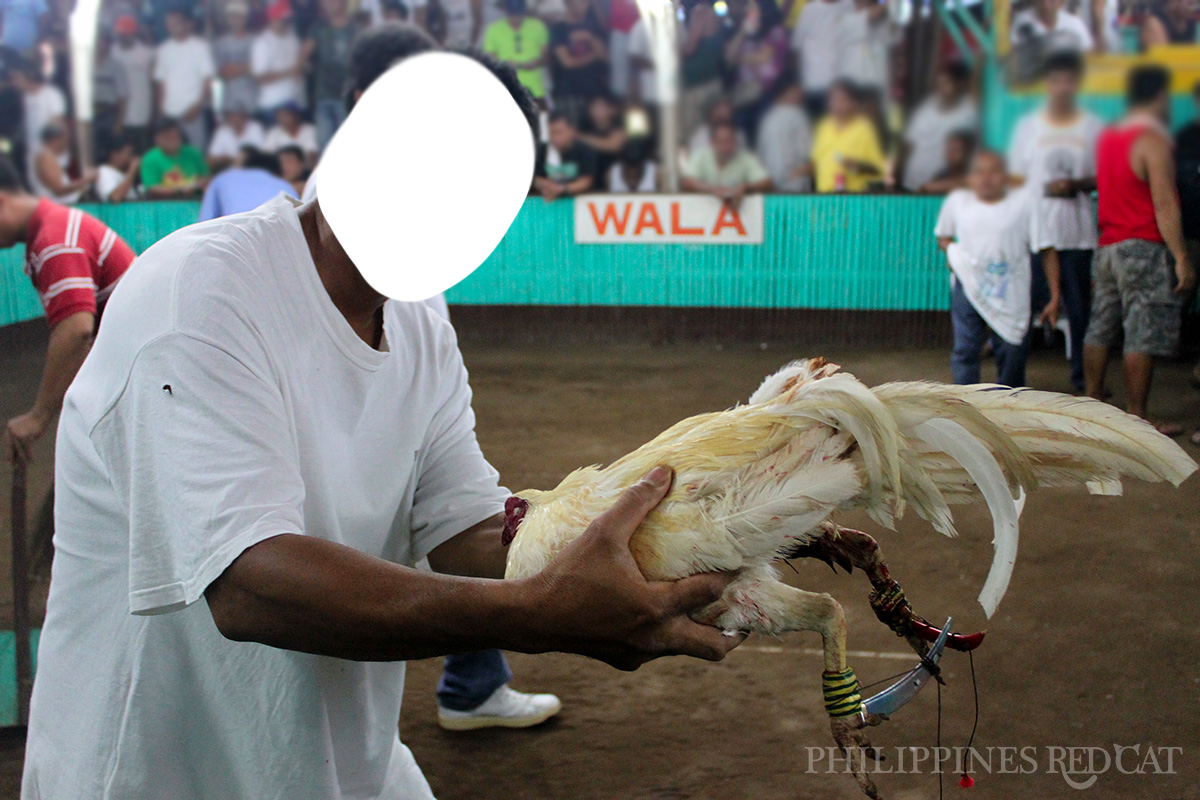 Given the aggressive nature of the animals when facing each other, the fights usually last less than a minute (often even less than 30 seconds). There are a few dozen of duels on any given day and during the breaks the dealers pay the money to the gamblers for the previous round (or not). 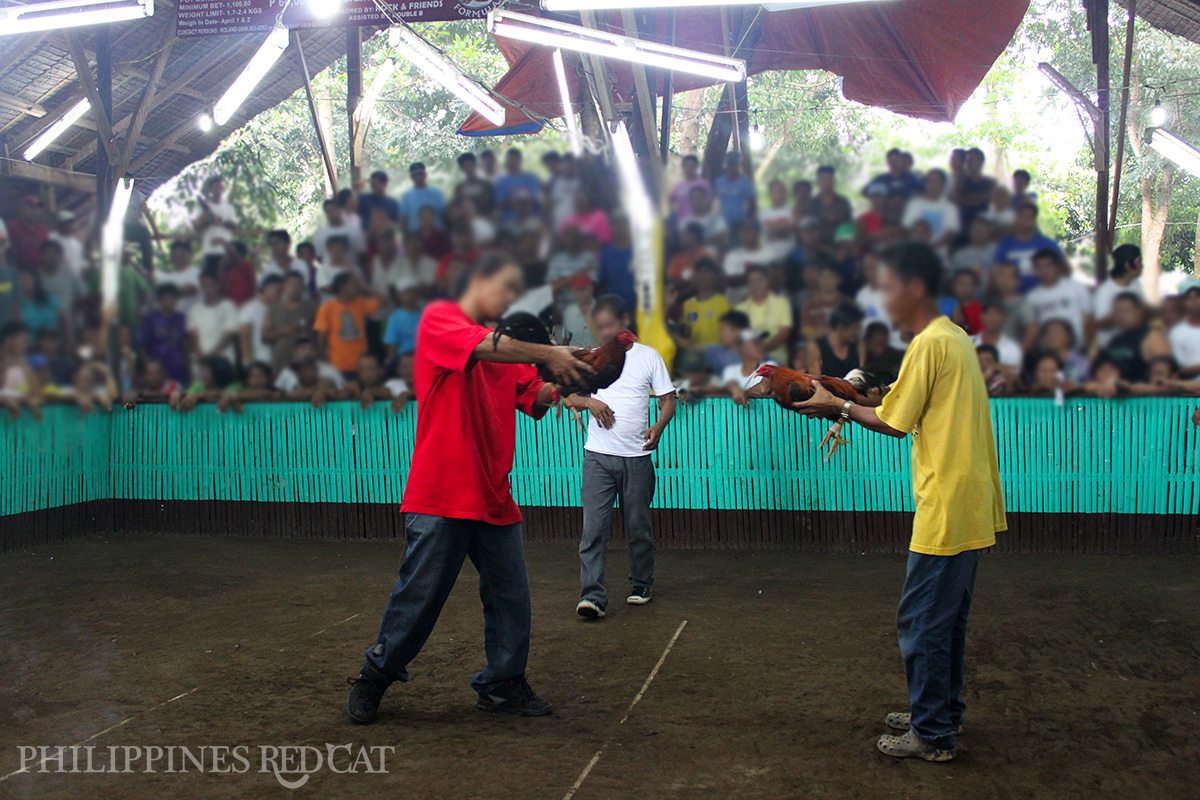 After the fight, the losing cock is brought to the arena’s surgeon, who would stitch up the injuries with needle and string. In case he can save the cock he receives around 200 Pesos and if he fails, the animal will be brought to the butcher, who is also in the arena and goes ahead to de-feather it and makes it ready to be stewed. 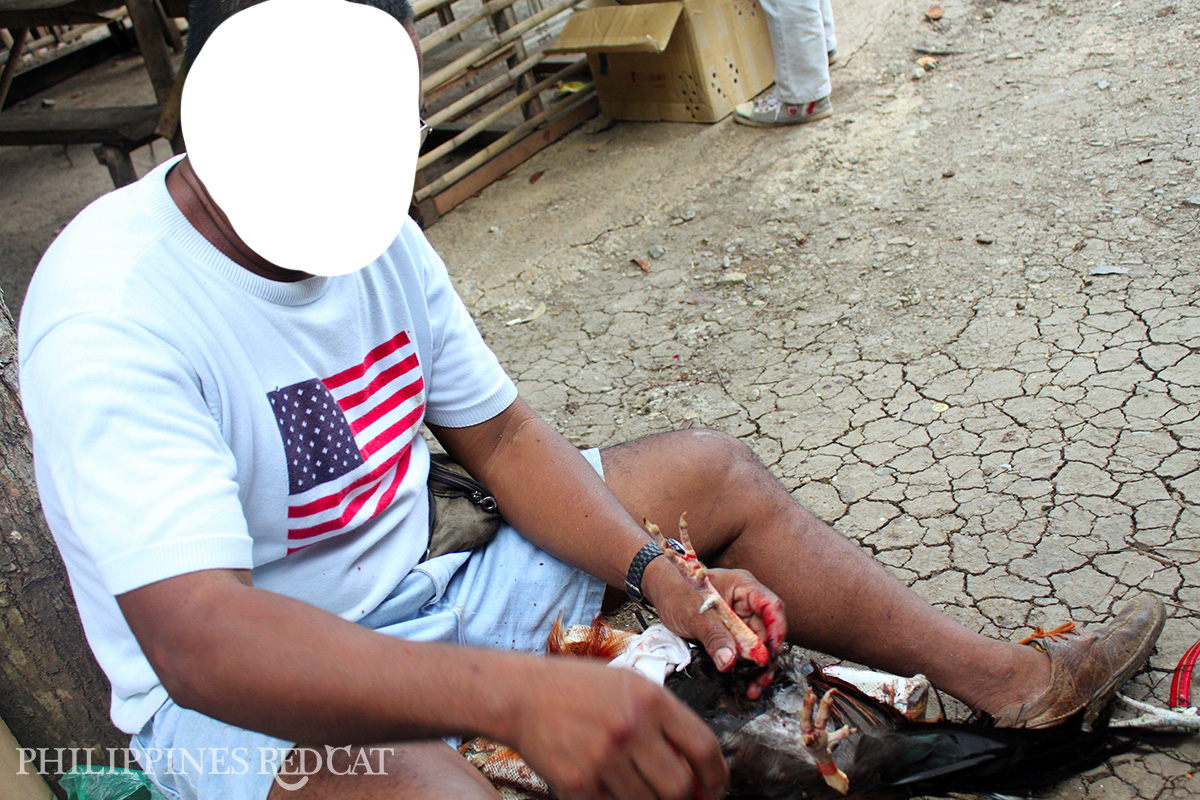 I took these photos at the cockfighting arena in Puerto Princesa, Palawan, on a random Sunday in March.

There is usually no entrance fee at the cock fighting arenas. Just ask a local Filipino (ideally a tricycle driver) where to find the arena and he’ll help you.