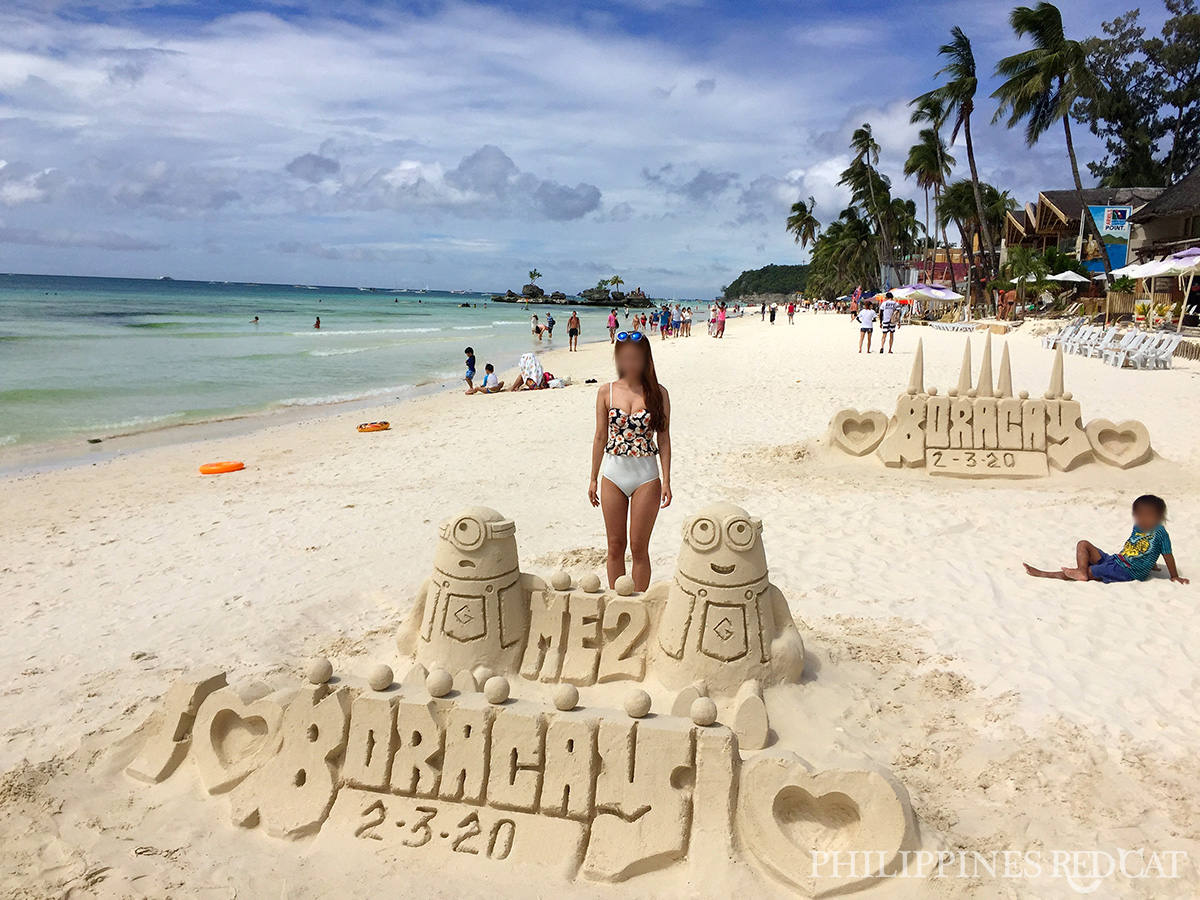 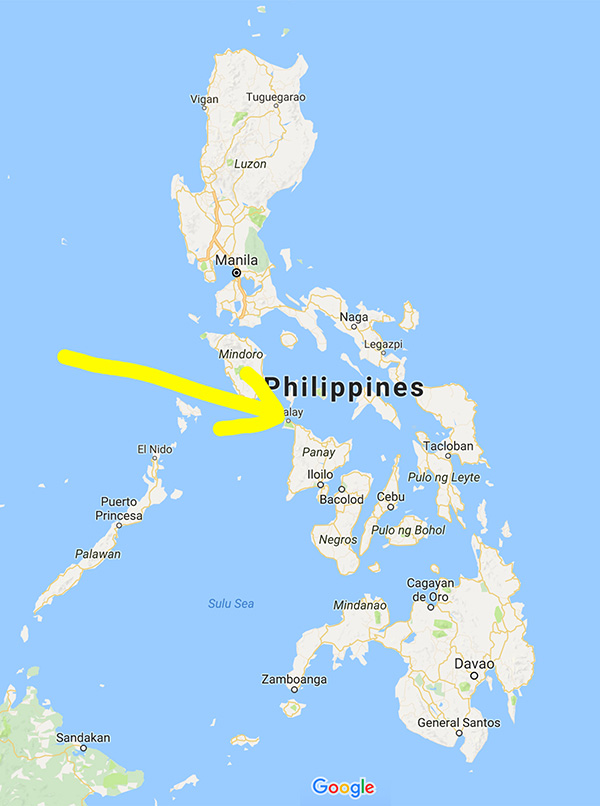 Boracay may not be the quiet and laid back tropical paradise that it once was.

If you walk along the so called Beach Walk on the main White Beach you will pass countless of restaurants, bars, tattoo sellers, hand painted t-shirt vendors and many, many more opportunities to spend money. And you will be surrounded by easily more than a hundred of other people within a 500 meter radius at almost any given time.

And then when you go out to the beach at 5:45pm to enjoy the sunset, you’ll find it extremely difficult to take that perfect picture to impress your Facebook friends because of the dozens of ships with white and blue sails in every direction in the ocean and the countless of other tourists (and even a few locals) around you who try to do exactly the same – taking pictures, videos and selfies and by doing so leaving only few spots of good photo opportunities.

I hope you aren’t completely discouraged from visiting Boracay now. It’s just important that you shouldn’t have the illusion of that perfect and nearly empty island paradise you see on most postcards, travel guides and websites. Boracay is the most developed and commercial (small) island in the Philippines, and if you enjoy a bustling nightlife with plenty of opportunities to meet Filipina girls as much as a beach with perfect white sand, then you should have a great time here.

There are three beaches you may want to check out. The number one and by far most beautiful one that made Boracay world famous is White Beach that is often marketed as the “whitest beach in the world”. There’s a 3km (!) long strip of bars, restaurants and shops right on the beach and you can conveniently stroll along the “Beach Walk” with huge palm trees and the ocean on the other side.

If you look at the picture below you will see some strips of green seaweed in the water. They told me that this is very normal during January-February and actually whitens the beach even more. Not sure if that is really true, but you can see by yourself how beautiful and white sanded the beach is.

And yes, Boracay sunsets are fantastic. It’s not uncommon that the sun drops behind the ocean without any clouds in sight.

On the opposite side from White Beach (means on the eastern coast of the island) is the often overseen Bulabog Beach. Frankly speaking, it’s not half as beautiful as White Beach and so people don’t usually come here to take a swim but rather to do wakeboarding. 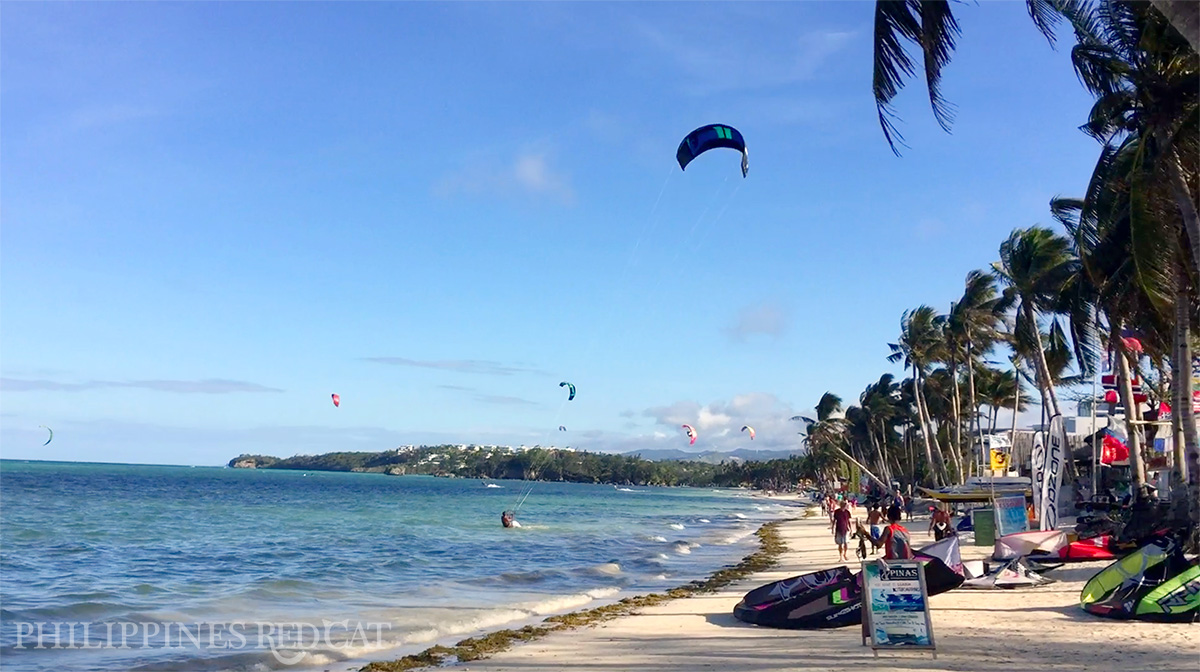 And last but not least there’s Puka Shell Beach on the northern coast and that’s really worth the 100 Pesos (shared) tricycle ride up from your hotel on White Beach. The first time I came here was in 2011 and there were only five or so other people on the wide and open beach, but these days as Boracay sees more and more visitors you should rather expect several dozen who all have the same idea as you: to escape the crowds from White Beach for a while and relax. They even sell beers and snacks over there now.

You will also see several groups of Filipinos who bring their bottles of Red Horse or cheap whiskey as well as some snacks along and have a relaxed picnic back in some shady spot. It’s not uncommon that they’ll invite you over to join, and that’s kind of what makes Puka Shell Beach so interesting: It’s still (relatively) authentic and here you have good chances to meet Filipinos who actually don’t want to sell you something.

King prawns, lobsters, crabs, squid, shells, milk fish (the national fish of the Philippines) – you can find it all here on the numerous scenic beachside restaurants that often dedicate a full table to showcase their fresh selection of seafood from today’s catch.

It’s a quintessential experience for me to have at least one seafood dinner whenever I go to the beach, and so in Boracay I can really recommend you to try the milk fish, but you better make sure to ask them if they have a boneless one. It tastes quite good, but what’s kind of annoying is they don’t serve any dipping sauces with the fish. Quite different to Thailand! 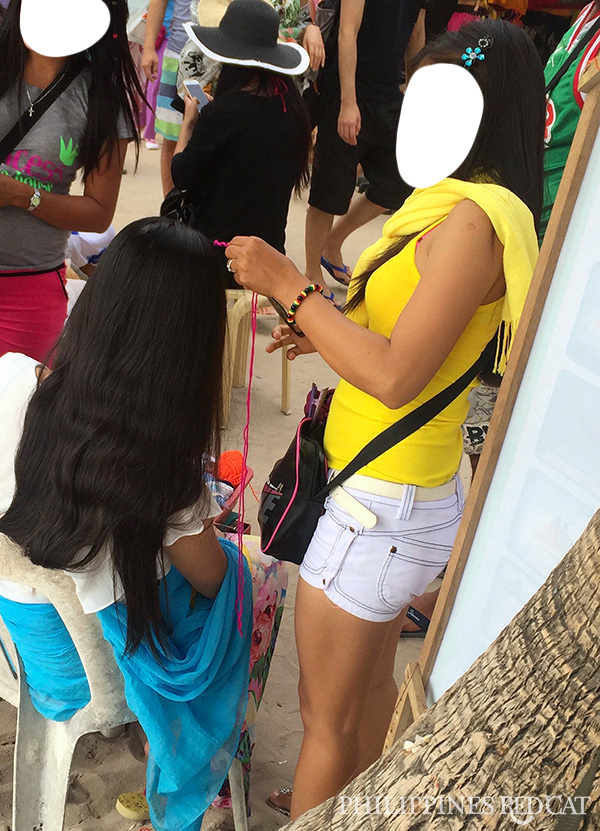 You can find pretty much all normal and unnormal things to buy on White Beach. Countless of small shops are set up every day along the Beach Walk, and then there are also several smaller and bigger markets or fashion malls with the biggest and most popular being D’Mall at Station 2. It’s basically an open air ground right next to the beach full with chain restaurants, travel agencies, game booths, fashion stores and more.

You can even find some shops with hand painted shirts (the Filipino guys are actually painting in front of the shop and you can make custom requests), tattoo shops, hair stylists and snack sellers all along the Beach Walk. It’s just fun to stroll and take a look around.

After about three days though, when you feel like you have seen everything and just wait for the action in the bars to get started, it feels more and more annoying that each and every Filipino in this place wants to sell you something. That’s why I think three or four nights is really enough to stay here or you will come back home complaining how touristic everything is.

Wherever you walk around on White Beach, it won’t take long until you are being offered some adventurous activity by a local Filipino tour agent. Popular are sunset sailing trips including snacks and beer (around 1,000 Pesos per person), wakeboarding and standup paddleboarding (see the first picture of Boracay sunset above). However, one of the absolute must do activities seems to be island hopping.

The common price for this trip is 800 Pesos including lunch and it starts at 10am. What is not included (and they don’t tell you about it before) is the 100 Pesos entrance fee to the “private” Crystal Cove Island (picture). Nothing special really, they just set up a walking path and some photo spots that aren’t that spectacular (the Chinese may have a different opinion there).

The highlight of the trip is supposed to be the jump off a cliff on another, smaller island, but the day I went they didn’t go there, claiming the tide was too high. However, I saw about half a dozen of boats parking there and people happily jumping into the sea.

Then we went on the mainland for buffet lunch (no view at all and lots of people around) before cruising around Boracay island and stopping at Puka Shell Beach on the north coast (see above). Unfortunately I had already been there the day before. Finally we went out on the ocean again for some snorkeling, after which they collected another 100 Pesos for the rental of the snorkeling gear. What a rip off. Then we went back to White Beach and the tour was over at 3:20pm (not 4pm how they claimed).

They call it “island hopping”, but we only visited one island (Crystal Cove) and that was not really worth it for me and the Swedish couple I made friends with.

I will end this guide with a picture of how White Beach normally looks these days. Again, Boracay has gotten very touristic now, but it is still fun to visit there for 3-4 days, especially if you enjoy going out at night, then there is no better island to party and meet Pinays in this country. I hope you enjoyed this honest review of Boracay during the daytime and that it helped with planning your trip.